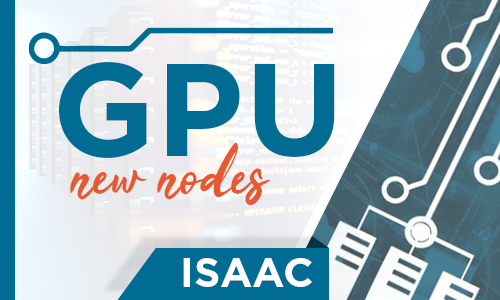 Four new Graphics Processing Unit (GPU) computational nodes are now available through the ISAAC Open Enclave computing cluster. This includes two Skylake compute nodes with one NVIDIA V100S GPU each and two Cascade Lake compute nodes with one NVIDIA V100S GPU each. The Cascade Lake GPU nodes were purchased with UTK Technology Fee funds and have priority access for academic coursework, but when not being used for academic work they will be available for research. The Skylake GPU nodes were purchase by the University primarily for research. All four GPU nodes will be made available in a GPU partition and in the shared condo that makes these available to any ISAAC University user. When being used for academic coursework the GPUs will be put in a reservation tied to the academic project. These GPU nodes are accessible via Torque and Moab through batch, interactive batch, and through Open OnDemand.

Submit your questions online about these compute nodes and other ISAAC services on the new OIT Service Portal.