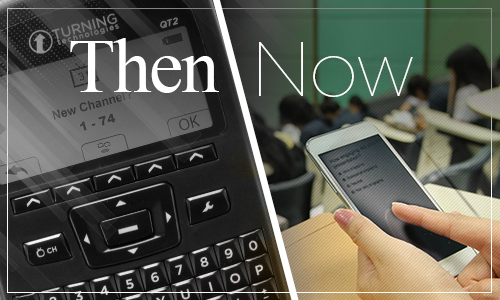 In fall 2018, TurningPoint campus-wide licensing was implemented for all students. This change allows students to use their mobile devices, such as phones, tablets, or computers, to respond to TurningPoint questions without having to purchase a physical device or purchase an individual license.

How has clicker usage changed with this broader level of access to this technology?

More instructors are using TurningPoint in their classes.

There is a slight increase in the number of students with accounts.

With the influx of new instructors, there has been a slight increase in new student accounts when comparing the semesters. The new accounts shown above reflect students in undergraduate-level courses. What is not shown in this data is the number of upper-level courses that are now using TurningPoint as part of the course.

The number of unique polling sessions has increased.

Overall, the usage of TurningPoint is growing each semester. We see new faculty coming on board discovering new ways to increase participation in their courses, check for understanding on subject matter and increase overall student engagement. Learn more about Clickers at our website. If you are interested in learning more about TurningPoint and how to use it in your course, please contact the OIT HelpDesk online or by phone at 865-974-9900.